I love those times when the band packs up and heads someplace warm during the frosty winter months here in Baltimore. The last time we did this was earlier this year, in April, leaving our still-cold city behind to enjoy a weekend in Santa Barbara, CA for a show at UCSB. Now, here in dreary December, we would spend a day in sunny Ft. Lauderdale, FL to play at the Miniaci Theatre on the campus of Nova Southeastern University. The concert was a gift to the community from the Sherman Library and free with library card. Excellent! We certainly love that way of encouraging kids to read. Because Mikel, Brian and I had a early-morning show at a synagogue in DC the next morning, we couldn’t stay the night and enjoy the weather, but a little sun is better than none. So we rose early to catch an 8:30 AM plane south. 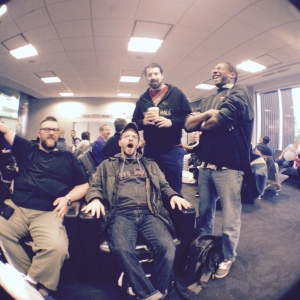 Yawns & laughs at the airport

I brought Snowy The Little White Dog along since I needed more footage for a home movie I was working on. I had filmed some video last winter in my backyard but when I finally got to editing recently, I didn’t have enough footage to work with. So Snowy came along and I filmed him with the guys at the airport and venue. (Here’s a link to the finished video)

We arrived in Florida and had no time to waste because of a delayed flight. Springing into military operation mode, we blew up baseballs and the Earth Ball, and set up the stage and sound checked as quickly as possible. Unfortunately, in our haste, we blew up the Earth Ball in the dressing room and then couldn’t get it out the door and onto the stage without deflating it a bit. D’oh!

Mikel tries to push the Earth Ball out the door.

But we had an amazingly fine time and performance. The kids were great fun to play with, and even the jokes during “Happy Place” were pretty good: “How did the maniac find his way out of the woods? He followed the psychopath.” and “Why didn’t Lady Gaga eat her meat dress? Because it was raw, raw, raw, raw, raw…”

After the show, we did a Meet & Greet with the families and signed autographs, feeling so welcomed by Anne Leon and the good folks at the Sherman Library. As we drove off the campus, we almost stopped to let Snowy say hi to an iguana, but Snowy wanted to hang at the airport bar instead. Silly dog. All in all a great day and another time well-spent for Milkshake.

Here’s a few pics courtesy Meagan Albright of the Sherman Library – thanks, Meagan!

Shepp and a fan on stage

Group pic with Anne Leon after the show.

Lisa and Anne Leon after the show.