Every year since 2007, Milkshake has been getting up super early the day after Thanksgiving and heading to Cow Palace at the Timonium Fairgrounds in Maryland. We do this to perform at the Festival of Trees, a yearly benefit event that raises money for the Kennedy Krieger Institute. The Institute is dedicated to helping children with brain, spinal and muscular disorders. I bring along bags of “snow” (little squares of white confetti), candy canes, sleigh bells, garland to decorate Tom’s drums and Brian’s keyboard, and santa hats for the guys and me. We do three shows chock full of Christmas music, which is always great fun to play in between our original tunes. My personal favorite is Milkshake’s “Christmas In Baltimore,” since I think it’s the perfect Christmas song to play at a winter show in our hometown.

This year, Cord reminded us that “Snowy” could be considered a Christmas song since Snowy does after all “ride on Santa’s sleigh.” So we brought Snowy The Little White Dog along to the show and gathered around a microphone in acoustic a’cappella fashion.

And to start the shows this year, we handed out the lyrics to “Christmas Time Is Here” from Charlie Brown’s Christmas, and encouraged the crowd to sing along with us. I hoped everyone would sing and even though that didn’t happen as loudly as I’d envisioned, it was a fun experiment. Some people are shy and only sing in the shower.

Our friend John Waire came to the early show for donors which happens before the doors actually open to the public at 10 AM. It’s the calm before the storm until we bring Santa to the Fest at the end of this first show and things get crazy. This year, Santa jumped out of a cake marking 25 years of the Festival of Trees. By the 11 AM show, things are hopping and so many friends come to play with us. The joy meter peaks. 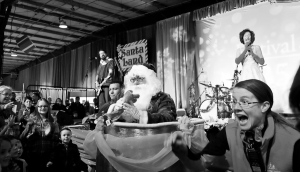 Santa Jumps out of a cake!

John is a great photographer and took some wonderful shots as part of his Year In The Light project. I’ve posted some favorites here, along with pics from our buddy and VIP to the band, Bill Auth. Bill has captured six of the seven years at the Fest, missing last year’s due to illness. We were so glad to have him back sharing the mayhem with us this year.

Every year, Michelle Mueller, Director Of Special Events at Kennedy Krieger, is there keeping things together with a smile, walkie talkie in hand. She tells me that when they unroll the green indoor carpets each year to set up for another Fest, they always find bits of that “snow” and traces of “sunshine” squares of yellow confetti that missed last year’s clean-up. We think about maybe scaling back and just using a bubble-machine or something. Then we both agree that the snow and the sunshine – it’s all part of the joy and happy memories made at the Festival of Trees. And for Milkshake, it wouldn’t feel right waking up late on Black Friday and going shopping! How boring that would be compared to the Festival of Trees.

Santa Jumps out of a cake!

Grown-up Baltimore fans might want to come to the Ottobar this Wednesday March 23 for a @stoopstorytellingseries featuring Baltimore musicians, including Lisa Mathews. #baltimoremusicians
Catch the band in a virtual performance 10 AM Friday November 26 for this year’s Festival of Trees benefitting Kennedy Krieger Institute. Visit the website fir more info: kennedykrieger.org #helpingothers #holidayspirit #festivaloftrees2021
Another fun morning and start to the holidays: welcoming Santa to the Mall in Columbia. Great seeing @missjuliewithfamilyfun again. #holidaymusic #holidayfun #mallincolumbiamd #santarocks
Happy Halloween from the Harborfest pumpkin patch!
Loading Comments...
%d bloggers like this: