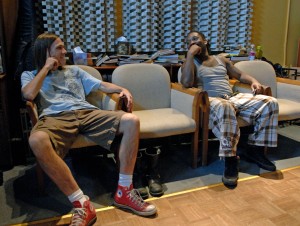 Mikel & Alex in the studio

Invisible Sound was hopping on Wednesday, June 20th. After tracking a couple vocals we were joined by Alex Handy, who came by to rap on “More Than Me,” a song about looking outside oneself written by Mikel. Now, it helps to understand that Mikel and Alex work together on the night shift at UPS and that Alex doesn’t rap for a living. But he’s the real deal – a guy who works hard and is determined to do the best he can for himself and those around him – and he brought that understanding to the song.

Alex tracks “More Than Me”

I sang a few lines throughout “More Than Me,” pretending I was Rhianna for a little while.  Milkshake hasn’t done a rap/hiphop song before, and we’re anything but hard core. And yet Got a Minute? has not one but three songs that include raps, or maybe I should say “rap-like features.” Our second rap-inclusive tune is “Baltimore,” a song I wrote about our hometown. I know Baltimore has gotten a bad rap (no pun intended) from people like Randy Newman and Counting Crows, but it’s our home. And if you’ve heard our “Christmas In Baltimore”you already know of our affection for the big small town.

“Baltimore” is an all-out rock anthem until the breakdown at the end when my daughter’s classmate Vance Thomas raps. It seemed fitting to me, since Baltimore is very alt-rock and very urban. It’s no surprise Baltimore’s known for bands like Wye Oak and Beach House and Dru Hill and Bossman. Let’s not forget Joan Jett and Tupac Shakur are both from here. Vance did a great job and I think he enjoyed his first experience in the studio, including his part in the kid chorus featuring my daughter Jesse, Mikel’s son Eric and niece Lauren. 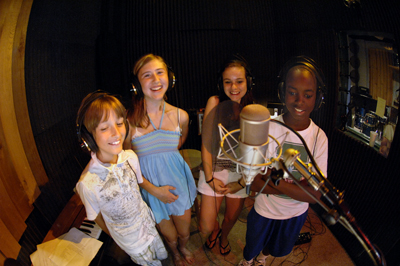 Needless to say, Eric and Jesse have grown up surrounded by our music and lots of outside musical experiences. Eric plays drums, Jesse plays piano, and they both have some incredible moments featured on this CD. But at this moment, all we needed were singers and we couldn’t have asked for better! Laughing and joking and full of confidence, the foursome tracked great harmonies on “Workin’ Kid Blues” and “Hiccup.”  After that we called it a very good day, and did an “Oh, yeah!” dance as Dave and Mikel chuckled.  Things are certainly going well, and this CD is so full of such variety I feel like we’re looking through a musical kaleidoscope — a little chaotic, but enchanting.

One thought on “Rap, rap and a beautiful thing.”